What does vomiting mean? – Spike’s Story

If a pet vomits, it could be a number of causes. And some can be very serious. We recently saw Spike Neiman, a very sweet 3-year-old Maltese poodle cross, who needed an urgent operation.

When I met Spike he was vomiting multiple times a day for a few days. Spike is usually very energetic and happy. The day we met he was very quiet and was just not his bouncy self. We knew that Spike’s condition was very serious and he needed immediate attention.

Vomiting several times a day always needs attention. We are concerned about exposure to toxins, dietary indiscretion and a foreign object, organ failure, tumors, and pancreatitis – inflammation of the pancreas. Spike’s owner was very worried about him, since he didn’t improve with 24 hours of supportive care.

Spike’s physical examination indicated that he had pain in his tummy. This isn’t unexpected, however it is unspecific. He needed more tests. His bloodwork revealed an elevation in white blood cells, his pancreas tested normal. This was helpful but did not pinpoint the cause of the problem. On abdominal x-rays we noticed gas in the abdomen, but x-rays didn’t reveal the full story. The next diagnostic test was an ultrasound which we use quite frequently in our pet hospital in Markham. A veterinary ultrasound produces an image using sound waves. This is a non-invasive test, which is completely painless. We found in Spike’s intestines an unusual structure suspicious of either a foreign body or an intussusception (this happens when one piece of bowel telescopes into an adjacent bowel). At this point we knew that we had to act fast since both of these conditions can be life threatening and they both require surgery. All veterinarians in Markham agree on this point. Veterinary surgery is life saving in acute these conditions.
Ultrasound image of the foreign object 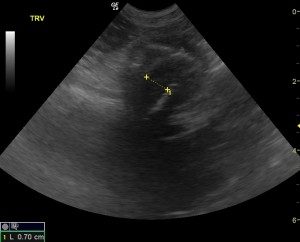 The foreign object is imaged in the center between the two x. The measurement is 0.7cm

We were not sure what we were going to find in Spike’s abdomen, but as soon as we started to look at his small intestine it was obvious – there was a foreign body stuck in them. (You may be thinking that foreign bodies can’t happen to your pet, because you are careful, but read on what we found in Spike). We gently made a small incision through which we removed the foreign body – it looked like half a piece of a rubber shoe sole! It wasn’t a bone, toy, holiday decoration, etc. Just a piece from a shoe. The following few days after surgery, Spike received supportive care and lot of TLC. His owner was very excited to finally be able to take him home.
Foreign object in small intestines 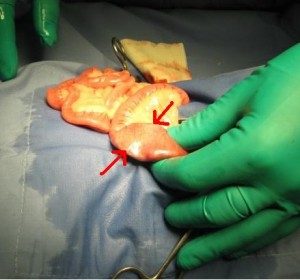 Small bowel during surgery The foreign object is jammed into the small bowels and cannot move forward, causing severe pain and vomiting.

I examined Spike this morning. It has been 10 days since his surgery. He looks like a different dog – So much happier! His owner reports that he is back to his old self and is trying to stay out of trouble!

Disclaimer: No part of this website constitute medical advice. Readers are advised to consult with their veterinarian.

Book an appointment and get…

*This discount of $25 applies to all NEW DOG and CAT patients. ONE per pet only.